Jam Session Song of the Week (3): A Porter's Love Song to a Chambermaid

Partly because we don't want our band to be just like others, and partly because we're not very good at doing things the "proper" way, our band has an odd collection of songs.  I realize that, so far,  I posted one song that is not a standard to anyone (Old Joe), and one song that may be a standard in the dixieland genre (Beale St.)...  but I'm not sure if it is.  So I thought I should post a real swing standard this week.  But, instead, I'm posting one that is somewhat forgotten, because I can't even follow my own rules.
This is a song with music by James P. Johnson, one of the most important piano players in jazz, and the composer of many great songs, including The Charleston.  It has words by Andy Razaf (Andriamanantena Paul Razafinkarefo), who frequently collaborated with Fats Waller.  And, the most well-known recording is by Fats Waller.  It's not the most famous of Waller's songs, but I really like it, and it is much easier to play than most of Waller's own compositions, like Honeysuckle Rose or Ain't Misbehavin'.  (The chords are simpler.)

Most of these old songs have a verse and a chorus, but the verses were rarely performed by swing/jazz bands, and that remains true.  In this case, we play the verse, using it as an introduction, just as Waller did.  This song is a good example of typical swing/jazz chord ideas:  The "A" parts have a I-VI-II-V-(I) pattern, with a I-vi-ii-V-(I) turnaround at the end.  This pattern is common in all kinds of music, and is the basis for I Got Rhythm, which must be the most well-known jazz standard.  What adds interest here is that the changes are one chord per two bars, then one chord per bar, then two chords per bar.  This adds variety and give a sense of momentum.

The bridge of this song is an altered/elaborated version of the Montgomery Ward bridge (or commercial bridge), which is probably the most common bridge in music of the 20s and 30s.  I think almost half the songs we play have this bridge.  So, this song is very typical of the genre, and has a lot of lessons in it.

In addition, I just think it's a great song.  Here is Waller's version:

(Julia Lee and the Washboard Rhythm Kings also recorded a great versions, but I can't find either online.)

Here is the lead sheet from the Firehouse fakebook: 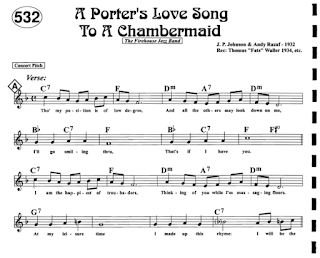 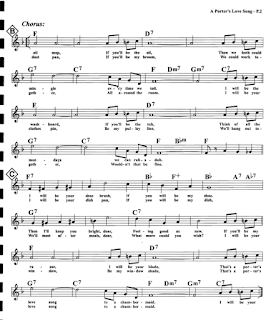 Note: The verse and chorus are clearly marked here.  However, the chorus is broken into A and B sections.  You could also see it as an A-A-B-A pattern, except that the second A has a different ending to lead into the bridge (B).


Another version by Red Norvo and Mildred Bailey:

This song is another new addition to the jam session repertoire, and we haven't yet made it sound very good.  I think we will, though, and I think it's worth it.  It's a song I like very much, and a significant song.

This one was written by W.C. Handy, who was very important in commercializing blues music and introducing the blues to all of America by incorporating blues elements into popular music.  The song refers to Beale Street in Memphis, Tennessee.  There are many versions of this song, but I associate it with Jack Teagarden, who recorded many versions of it, and who was one of the most important and pioneering trombone players of the swing era.  (wikipedia.de claims that it was his signature song, but American sources tend to say that was "Stars Fell on Alabama.")

Here is a version with Jack Teagarden on vocal and trombone, his brother Charlie on trumpet, and Benny Goodman on clarinet:


Here is another with Jack Teagarden, Joe Venuti, Eddie Lang, and Benny Goodman:

One of the interesting things about Teagarden's different versions is how he sometimes invents new lyrics that were not part of Handy's original song.  Here is a lead sheet for the song, from the Firehouse Jazz Band Fakebook.  You can see here an eight bar part coupled to a twelve bar blues form (although not a basic one- this has some interesting variations).  This was a device Handy used frequently.  The shift of key signature between the two parts was also characteristic of  Handy's compositions. 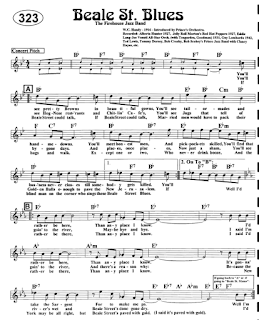 Posted by adrian at 2:23 PM No comments:

So, we've got this jam session going here in Zürich.  I'm happy to say it's starting to work out pretty well.

I've decided that each week I will write something about one of the songs we play at the jam session.  I hope that this will help people understand what we want to do, why we pick these songs, and where we find them.

For this first post, I have chosen one of the newest songs in our list: Old Joe's Hittin' the Jug.  We've only played it twice, rather badly.  So, that's the first thing you can learn from the jam session-  you've got to be willing to sound bad in order to eventually sound good.


This is not a really famous song.  It is most well-known from the various versions that Stuff Smith recorded.  I can't find much information on it, only that it was written by Palmer and Stride.  That is Jack Palmer, who also wrote Everybody Loves My Baby, Here Comes the Man with the Jive, It All Begins and Ends with You, and I've Found a New Baby.  Apparently he liked titles that formed complete sentences.


Why do we play this song?  Basically, because it's fun and simple (but not that easy).  I would guess that I probably first heard it played on A Prairie Home Companion by Andy Stein, but the first time I really remember hearing it was from the Loose Marbles. I like how it sounds a bit aggressive, and I like the breaks.

The tricky part is that the song should be played fast, so you've got to be ready to fill those breaks with something quick and forceful when it's your turn.  And someone has to designate whose turn it is.  Other than that, there is not much to the song.  It is usually played in the key of F minor, but we have been playing it in D minor, because that seems to me to be easier for everyone.

Here is the chord chart in D minor.  You don't really need a written melody for this one. 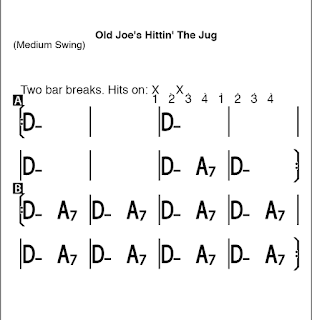 Posted by adrian at 3:08 PM No comments: