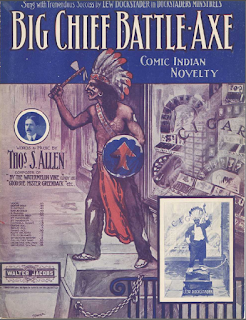 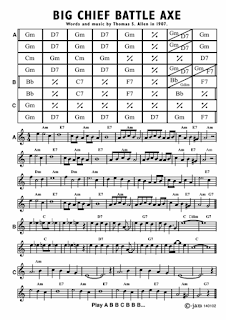 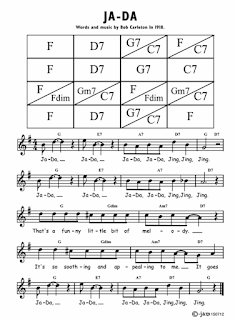 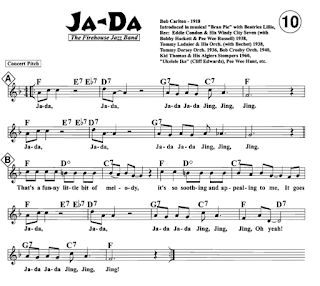 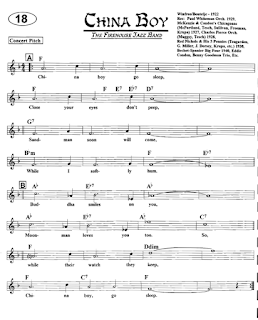 Here is another song that has had a long life and been recorded countless times...  and yet it is not necessarily a well-known "standard."  It's strange how that happens.  Anyway, I like it, and it meets an important requirement: it's very simple.

Coquette (aka Little Coquette) was written in 1928 by Johnny Green, Carmen Lombardo, and Gus Kahn.  It was recorded by several bands at that time...  in, actually, not-very swinging versions (Guy Lombardo 1928, Paul Whiteman 1929, Dorsey Brothers 1928).  It should not be confused with the song of the same title written by Irving Berlin in the same year!

For our dancing purposes, things get interesting a little later.  Bob Crosby's band applied their unique style to this song in 1937.  This probably was the version that set the song on a new, dancing path.  To see how far it evolved, be sure to look at the last video below.

The song itself is quite simple in chords and melody, but the melody has a big range, making it somewhat hard to sing.  Still, for jam sessions, a song this simple is good.

Here is the lead sheet from the Firehouse Fakebook: 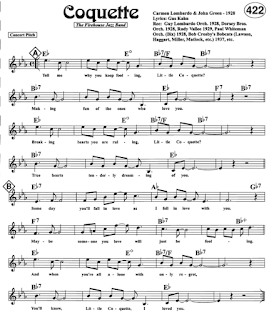 Here is our simplified chord chart: 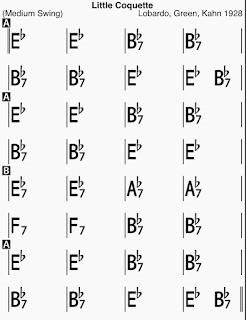 There is not too much more to say about this song.  But here are a lot of great versions...  Especially the Louis Armstrong.

This one is a little silly...

Jam Session Song of the Week (6): I Can't Believe That You're In Love With Me

This week's song of the week is a good one for the singers.  It has a lovely melody, and you might even call it a jazz standard.  It was written in 1926 by Jimmy McHugh and Clarence Gaskill, but it remained popular long enough to be recorded by Frank Sinatra.

Musicianers, this one has some tricky chords...  but it's not too hard.  The augmented C7 adds a lot of flavor, but it happens so fast that no one will notice if you miss it.

There is also a rarely-sung verse, but I don't seem to have sheet music for it.

We have only played this two or three times at the jam session, but we really like it and it would be perfect for one of our great guest singers to learn.  I'm going to keep it short this week and not try to analyze the song...  So here are some recordings to check out:

And here is the lead sheet from the Firehouse Fakebook: 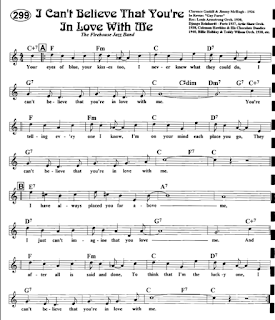 Posted by adrian at 2:06 PM No comments:

Jam Session Song of the Week (5): The Heebie Jeebies

This week's song is another that is well-known, but is not played enough to be called a standard.  But it's got a lot of history, and the recorded versions have some great lessons.

This song was written in 1925 by Boyd Atkins.  The title refers a slang expression (one that was new at that time) for a feeling of discomfort.  This song is a good example of how much misinformation there is in jazz history.  Some sources say that Atkins presented it to Armstrong as an instrumental and that Armstrong wrote the lyrics.  At least one source says that Connee Boswell wrote the lyrics.  (The simple and likely explanation is that they each wrote some lyrics.)

Many sources repeat the story that Armstrong "invented" scat singing when he dropped the paper with the lyrics during his recording session.  (This is untrue: he may have scatted on the recording because he dropped the paper.  Or because he simply wanted to.  In either case, scat singing was not invented at that moment.  It existed before.  Some argue that this was the first time it was recorded, but that can only be true if you define "scat singing" very narrowly.)

Adding to the confusing history of the song, there was a Heebie Jeebie dance, which was popularized through printed instructions.  The lyrics of Armstrong's recording refer to a "heebie jeebie dance," but it is likely that the dance was created after the recording.  Here is more about all of this history.

In any case, the song is a simple one, and it's fun to play.  I think it is worth studying because of what the recordings can teach us.  Armstrong's recording is not considered one of his greatest, but I think that his scatting in this recording is a powerful lesson for horn players.  This scatting is very simple in melody, but it is so inventive and swinging in rhythm.  It is also typical of the scat style of the 20s and 30s, which is very different from the scatting of the 50s.  Today, it is the 50s style that is widely imitated.  Here it is, from 1926:


The later versions by the Boswell Sisters are also swinging, rhythmically inventive, and make great use of dynamics (loudness changes).  I see many horn players and singers who neglect the potential of dynamics, which are a crucial ingredient.  (If you don't know the Boswell Sisters, you should!  They were the inspiration for the more famous Andrews Sisters, and they were far more interesting.)

The Boswells recorded several versions.  Here is a filmed version (It also features Bunny Berigan, and Eddie Lang, two of the greatest musicians of the time, who often recorded with the Boswells):


Here is a recorded version which again shows the complex arrangements and extreme tempo changes that were the trademark of the Boswell Sisters:


Finally, here is the lead sheet, from the Firehouse Fakebook: 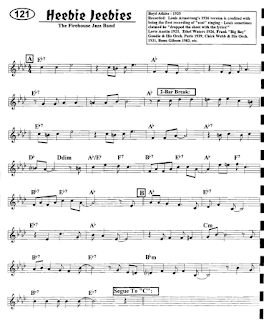 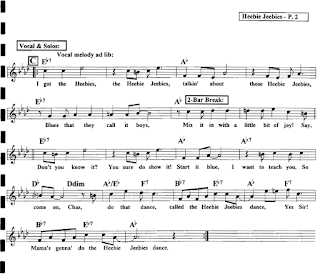 We play only the "C" section, and we play it Bb.  I don't remember why we changed the key, but probably because it is a better key for Christopher to sing.  Here is our chord chart: 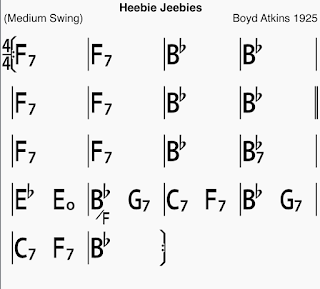 As a bonus, here is a totally different song with the same name!

Posted by adrian at 1:39 PM No comments: